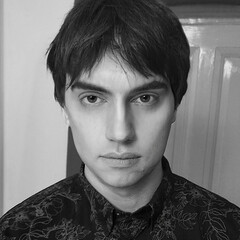 Sanjin has a deep passion for fantasy games and has worked for a number of gaming IPs and entertainment companies including Games Workshop, Blizzard ent, Hadean, MetaGravity, KingArt, and numerous other public and private works.
Prior to this, Sanjin had worked in the South Korean music industry as an MV director.

Sanjin trained in traditional painting and classical sculpting at his family atelier, instructed from infancy under the exacting tutelage of his father, a UNESCO-certified painter and conservator, and his architect and painter mother. He graduated digital arts and graphic design at the Metropolitan University in Belgrade.
Alongside attaining mastery with the brush, Sanjin commands knowledge of industry standard workflows for 3D / sculpting & texturing and PBR / real-time art, directing and shooting videos, branding, web & UI design and graphic design.

He loves to tinker with tech; and when he is not creating, you will usually find him chilling on discord and doing something in the web3 space.